August 13, 2016
Rancher has a load balancer built it (HAProxy). Let's compare its performance vs Docker Swarm one. I will use 3 identical nodes:


I will benchmark against a hello world HTTP server written in Scala with Akka-HTTP and Spray JSON serialization (I don't think it matters though), sources are on GitHub. I will use Apache AB benchmark tool.

As a baseline, I exposed the web server port outside the container and run the following command:

It shows 22400 requests per second. I'm not sure whether it's a great result for Akka-HTTP, considering that some services written in C can handle hundreds of thousands requests per second, but it's not the main topic of this blog post (I ran the test with 100 concurrent connections (-c 100), and it shows ~50k req/sec. I don't know if this number is good enough either :) )

Now I created a Rancher so-called "stack" containing our web server and a build in load balancer:


OK, it looks like HAProxy introduced a lot of overhead. Let's look how well Swarm internal load balancer handles such load. After initializing Swarm on all nodes, create a service:

Check that the container is running:

OK, great. Now I will scale our service up one container at a time, running the same benchmark as I go:


Much better! Swarm LB does introduce some little overhead, but it's totally tolerable. What's more, if I run the benchmark against the node where single container is running, Swarm LB shows exactly same performance as directly exposed web server (22400 req/sec in my case).

To make this blog post less boring, I added a nice picture :) 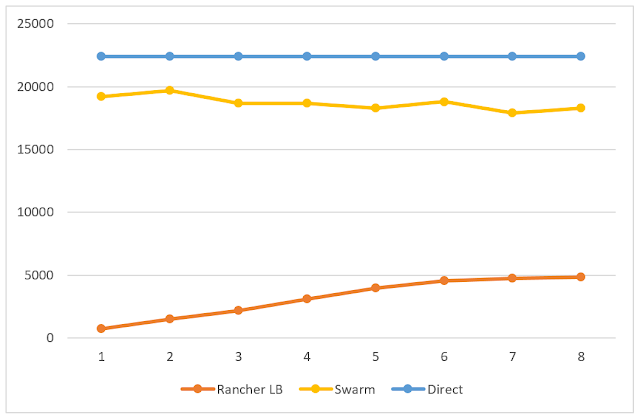