then find all lines containing Microsoft namespace in them, and format the type names the usual way, like "Microsoft.Win32.IAssemblyEnum".

Ok, it turns out that regex performance may depend on whether it's case sensitive or not. What's worse, I tested F# with case insensitive pattern, but Rust - for case sensitive. Anyway, as I've upgraded my machine recently (i5-750 => i7-4790K), I've rerun F# and Rust versions in both the regex modes and added Scala to the mix. First, case sensitive mode:

Although case sensitive patterns performs roughly the same on all the platforms, it's quite surprising that Rust is not the winner.

Scala is faster in case insensitive mode (?), Rust is slightly slower and now the question: what's wrong with .NET implementation?.. It performs more than 3 times slower that case sensitive and the others.

It takes 56 seconds to finish.


I removed Elixir from the chart as it's a clear outsider and its results make the chart read harder: 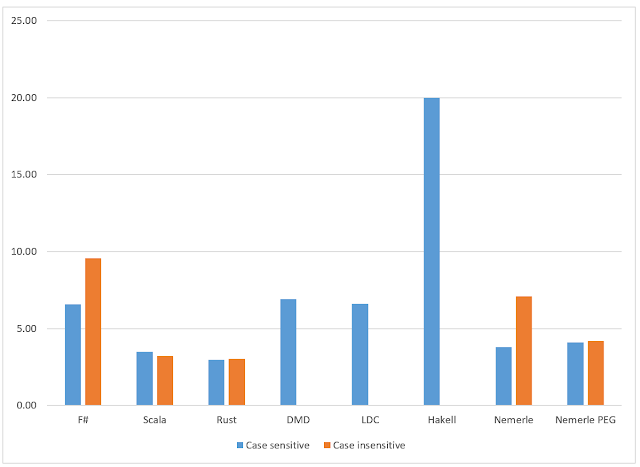 Anonymous said…
To be fair, regular expressions are known to be a bit of a weak spot in Rust currently. Efforts are in progress to improve the implementation, but they're still a work in progress, performance-wise.
January 5, 2016 at 3:59 AM

jneem said…
Could you make the full input file available? I'm trying to improve rust's regex performance, and it would be nice to have more benchmarks to analyze.
January 5, 2016 at 1:32 PM

Anonymous said…
It would be interesting to see memory usage..

Unknown said…
D supports a variant of stdio.readln that re-uses the buffer, what's the performance like if you change it to that?
January 5, 2016 at 9:25 PM

Unknown said…
Answering my own question, for D using readln(buf) shaves half a second off the D time on my laptop.
January 5, 2016 at 10:09 PM

Anonymous said…
I posted a faster version on the dlang forums, you can find it here if you want to give it a whirl:

you may need to alter the filename on line 10, you appear to be on Windows and I adjusted it for my Linux OS.

It runs twice as fast as the original ctRegex implementation in your blog post for me. The output is the same, feel free to verify.

raichoo said…
I took the liberty to modify the Haskell example to use ByteString instead of constantly packing
and unpacking Text. This now runs in about 5 seconds on my laptop. https://gist.github.com/raichoo/3ae8dd14699b1f731916
January 10, 2016 at 4:12 AM

KubuS said…
I bet .NET is converting all strings to UPPER-CASE or lower-case before comparison instead of comparing strings on char/ASCII code level.
April 10, 2016 at 11:26 PM

Роман Смирнов said…
Elixir code should not be placed directly inside defmodule, when you don't want compile time execution. Besides, comparing a compile time of Elixir code with run times for other languages is unfair.
March 29, 2017 at 11:48 PM

Роман Смирнов said…
Besides, take a look at https://github.com/elixir-lang/flow for best practices of parallel computations in Elixir.
March 30, 2017 at 12:36 AM

Vasily said…
I updated results on:

Janu said…
Thanks for sharing such informative guide on .Net technology. This post gives me detailed information about the .net technology. I am working as trainer in leading IT training academy offering Dot Net Training in Chennai and i use your guide

Cyberz Pc said…
Wow, that is appealing studying. i am glad i found this and were given to artifice in it. I preferred it loads. thanks for the colossal and precise data. Prezi Crack
May 6, 2022 at 7:14 PM

Cyberz Pc said…
It changed into wondering if I may want to use this write-taking area regarding my supplementary website, notable thanks. Wifi Password Hacker
May 7, 2022 at 4:17 AM

Unogeeks said…
Thank you for sharing such a nice and interesting blog and really very helpful article. If you want to become Oracle Fusion SCM Certified Consultant, attend this Best Oracle Fusion SCM Online Training Course offered by the Unogeeks
August 8, 2022 at 10:16 AM