Showing posts from 2015
Show all

July 18, 2015
I don't have a clear impression about Elixir language yet. I don't like it has Ruby like syntax, but do like it has pipe operator and macros. So, Fibonacci:

It executes in about 13 seconds which is on pair (even faster for unknown reason) with Erlang, no surprises here.

I've always been interested in metaprogramming. Sooner or later, I'm starting to feel constrained within a language without it. F# is a really nice language, but I'm afraid I'd have got bored with it if it'd not have Type Providers, for example. Why metaprogramming is so important? Because it allows changing a language without cracking the compiler. It allows making things which seemed to be impossible to implement.

I'm dealing with cryptography hashes a lot at work, nothing rocket since, just MD5, SHA-1 and so on. And I write tons of tests where such hashes are used in form of string literals, like this:


The problem with this code is that the compiler cannot guarantee that the hex string in the last line represents a valid SHA-1. If it does not, the test will fail at runtime for a reason it's not intended to.

OK, now we can formulate our task: provide a language construct to enforce a string literal being a valid SHA-1 hexadecimal, at compile time. We wil…
2 comments
Read more


It's execution time is 1.33 seconds, which surprisingly is not the best result so far.
A C# version:

Also, I compiled this D code with GDC compiler and it executed in 990 ms, which is the best result:

May 16, 2015
I strongly believe that we should keep code as referential transparent as possible. Unfortunately, F# language does not encourage programmers to use Either monad to deal with errors. The common practice in the community is using common in the rest .NET (imperative) world exception based approach. From my experienced, almost all bugs found in production are caused by unhandled exceptions.
The problem
In our project we've used the Either monad for error handling with great success for about two years. ExtCore is a great library making dealing with Either, Reader, State and other monads and their combinations really easy. Consider a typical error handling code, which make use Choice computation expression from ExtCore:

The code is a bit hairy because of explicit error mapping. We could introduce an operator as a synonym for Choice.mapError, like <!>, after which the code could become a bit cleaner:


(actually it's the approach we use at in our team).

May 04, 2015
Go code is relatively low-level since it does not have "foreach over range" syntax construct:

March 29, 2015
Rust is an interesting language. It is not a primitive one, like Go where we don't have ADTs, pattern matching and generics (but we do have Nils). And it's advertising as a safe and performant system language. Today is the very first day I'm looking at it. Let's "smoke" test it with Fibonacci :)

The compiler is quite slow: it takes 2-3 seconds to build this tiny program. 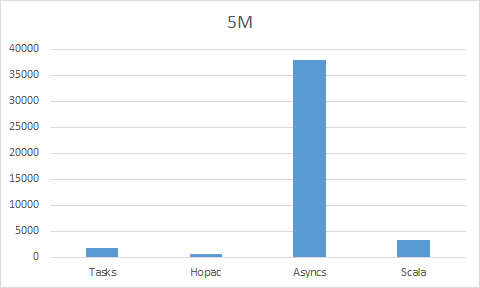 Tuomas Hietanen posted a parallel reduce function that uses TPL Tasks. I found it interesting to compare performance of this function with analogues implemented using F# Asyncs, Hopac Jobs and Scala Futures. The author uses noop long-running reduce function to show that it's really run in parallel. In this blog post we are benchmarking another aspect of the implementations: how much extra cost is introduced by a particular parallezation mechanism (library) itself.

We translate the original code almost as is to Tasks and Hopac:

Fibonacci: Hopac vs Async vs TPL Tasks on .NET and Mono 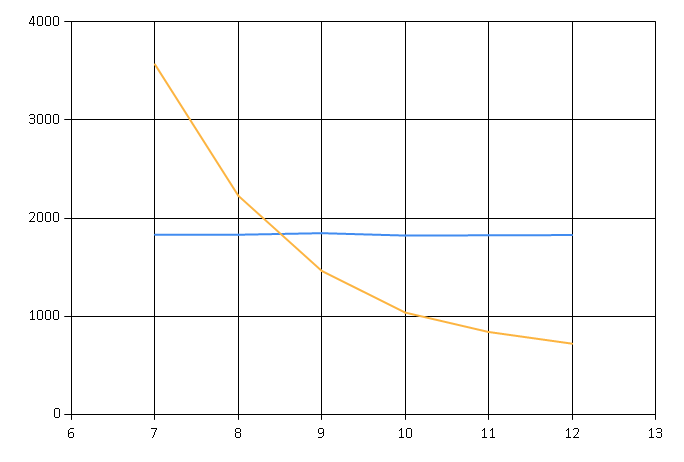 Hopac claims that its Jobs are much more lightweight that F# Asyncs. There are many benchmarks on Hopac github repository, but I wanted to make a simple and straightforward benchmark and what could be simpler that parallel Fibonacci algorithm? :) (actually there's a more comprehensive  benchmark in the Hopac repository itself, see Fibonacci.fs)

All three functions create *a lot* of parallel jobs/asyncs/tasks. For example, for calculating fib (34) they create ~14 million of jobs (this is why Fibonacci was chose for this test). To make them work efficiently we will use the sequential version of fib for small N, then switch to parallel version